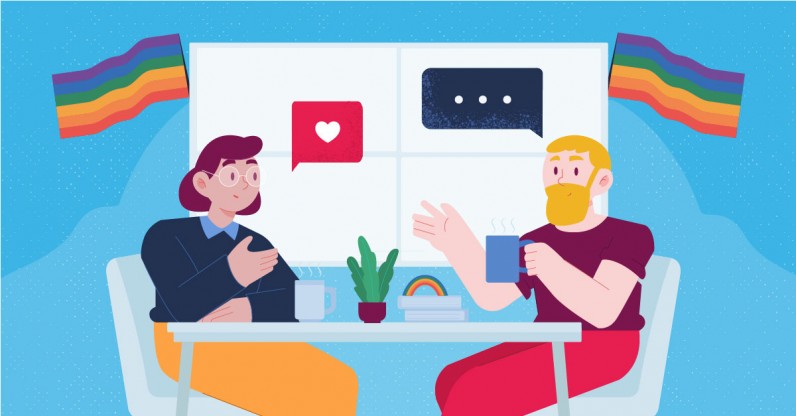 The language we use with our colleagues, friends and families can have a huge and lasting impact, especially when it centres around often emotionally charged issues like sexuality or gender. Conversations around these topics can be fraught with confusion and worry over offending others, especially as the terms we use to respectfully discuss LGBTQ+ topics, sexual orientation and gender identity continue to develop and change.

But when looking to foster a more inclusive work environment where people can be free to be themselves and thrive, we all need to make sure we’re contributing. This Pride Month, we’re placing a focus on LGBTQ+ inclusive language at work, and discussing why we all have a responsibility to appreciate it and use it correctly.

LGBTQ+ inclusive language is used to describe and refer to LGBTQ+ individuals in a respectful, positive way. By doing this, we acknowledge and respect the differences and diversity of our colleagues, including their orientations and gender identities.

In the workplace, we often need to refer to people, introduce them to others or discuss their performance. So, when it comes to doing this for LGBTQ+ individuals, we need to use language that correctly identifies people to respect and show support for their identities and boundaries. Although most people refrain from using offensive terms, there are many instances where seemingly innocent everyday language can make people feel uncomfortable or excluded at work – known as ‘microaggressions.’

For many years, LGBTQ+ individuals have faced discrimination and microaggressions at work due to a history of intolerance and hate, so through using inclusive language, we can contribute to moving the world away from these inequalities and create a better working environment for all.

Clearing up the confusion

To have a valuable discussion around inclusive language in the workplace, we need to understand some commonly misused terms.

Let’s take a look at some other often-overlooked words and phrases that could be replaced in favour of more inclusive versions to support our LGBTQ+ colleagues:

A word on pronouns

Many people are adding their pronouns to email signatures, social media profiles or stating them in meetings. When people disclose their pronouns (he/him, she/her), it normalises the practice of not assuming someone's gender. And when LGBTQ+ individuals feel more supported in stating their own pronouns, it can help them feel more comfortable in being themselves at work and in public.

For example, when introducing someone for the first time to our team, we can ask for their pronouns in advance of the meeting (if not already known) to make sure they are identified correctly. This doesn’t mean we’re asking them to disclose their sexual orientation or gender outright – but it does mean we’re respecting their identity, which is a basic human need.

Skipping this step means we run the risk of misrepresenting someone’s gender identity which, even without malice, is a microaggression that can seriously affect the person’s mental health and workplace experience.

Becoming aware of the importance of gender-neutral language helps us to avoid bias towards a particular gender. A great step for organisations to take is to start using ‘they’ instead of ‘he/she’ in contracts and other legal company documentation.

We can also refer to this type of inclusivity as ‘using people-first language.’ Instead of saying ‘the gay community,’ say ‘people who identify as lesbian, gay, bisexual or transgender.’ This way, you avoid assuming everyone in the group has the same characteristics or experiences.

Why we should embrace inclusive language

By building LGBTQ+ inclusive language into an organisation’s values and ways of working, we can all contribute to creating a safer, more welcoming space for LGBTQ+ people in the everyday workplace and the tech industry as a whole.

Finally, it’s important to understand that people who aren’t open about their sexual orientation or gender identity at work may not ever feel comfortable disclosing this information. So, organisations must never force or seek to expose, but simply work to create a culture of trust and inclusivity for LGBTQ+ people.

We’re inclusive of everyone here at The Workshop, but we also understand that the topic of inclusivity (and how to better it) needs to be incorporated into year-round conversations so that everyone’s voice is valued. Our Belonging, Inclusion & Diversity team and LGBTQ+ Employee Group is always open to new members who want to show support, add their thoughts or help us find ways to promote inclusion, allyship and diversity – through Pride Month and beyond.

Why should engineers choose Berlin and blockchain?

In 1962, famed British science fiction author Arthur C. Clarke published an essay containing his ‘three laws.’ The third and most famous of these states: any sufficiently advanced technology is indistinguishable from magic.

As a definition of ‘intelligence’ in a computer programming context, AI can be a controversial topic. One of our Senior Software Engineers, Mariela, takes us through what the theory of evolution means for artificial intelligence as a tool for good.

When the BID committee was recently tasked with bringing more awareness to what they do and why they do it, it didn’t take the team long to suggest a way forward – the first ever BID Day in Málaga! We asked them to recap the day and give us the lowdown on all the insights.