Building a team in a pandemic 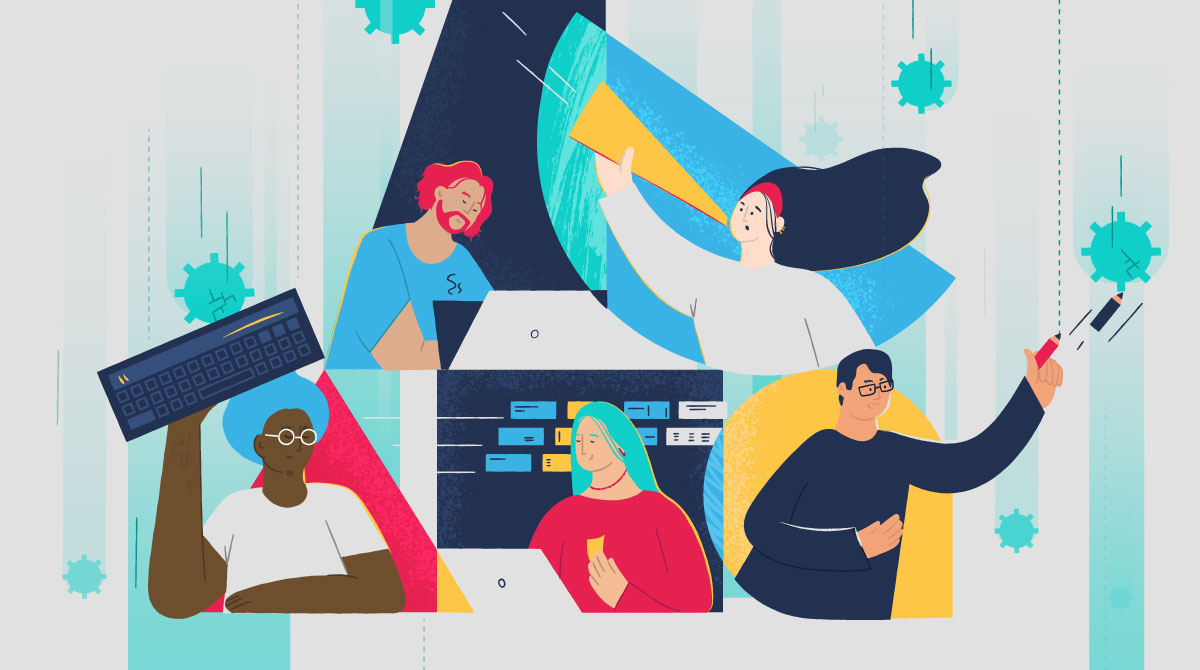 At the beginning of 2020, it was looking like a pretty exciting year. We were creating a new team to build a platform from scratch. We had a great mix of people, including some with experience of the old platform and others that could bring fresh ideas to the development. Writing a new product from scratch with the chance to use cutting-edge technologies — it was every developer’s dream.

Then I had my first experience of life in a pandemic. I had just celebrated my birthday with some friends. The day after the party, one of my guest’s co-workers tested positive and we all had to stay at home for a couple of weeks.

The first week at work was strange as we were in the middle of user story mappings. This is a collaborative meeting where the team discusses how to divide the project, usually by moving post-its around on a whiteboard. So the team set up a laptop, pointed the camera to the whiteboard and we started a video call.

The quality of the video was not HD at all, so I had to use the camera’s “zoom” functionality continuously — i.e. asking a colleague to move the laptop close to a specific area of the whiteboard. But we managed and got through it quite well. As I was following the meeting from my computer, I was also copying the user story mapping into Lucidchart, so when the meeting finished we had a copy of it already on our Wiki, saving some time. That also helped me to follow the meeting easily without using that camera zoom.

By the end of the week, we were getting used to this way of working. At the time, we were just a group of people trying to work together for the first time, in a way we were not used to and on a project that was new for all of us. Could you call that a team? Probably not... for now.

Then the whole country was put on lockdown and everybody had to work from home. The first few weeks were not easy. We were not prepared at all, but neither was the company. It was ready for employees working from home, but not for more than 200 people doing it at the same time. The performance of our video conferencing software was poor, which was far from ideal for the highly collaborative meetings we were trying to have.

The technical issues got fixed fairly easily, but the cultural ones were much harder to address. Talking to a screen is not the same as talking face-to-face. Plus, most of the time we were sharing someone's screen, so our cameras were disabled to allow for a bigger display area. It was hard to know whether people understood things you were saying.

The meetings were also taking much longer than expected and after a couple of hours it was really hard to stay focused. We introduced breaks every hour, and they helped, but we were still spending too many hours in ineffective meetings. At the end of the day, I was exhausted and would need to go outside to do sport or go walking. But we were confined, so that was not possible.

Returning to our values
By the end of March, the exciting year had turned into the strangest year of our lives. Luckily, things started to get better as we got to know each other. Our values of empathy, creativity, collaboration and trust were more important now than ever.

Empathy
We put ourselves in each other's shoes, as sometimes we were talking about terms related to the current platform that were not familiar to some members of the team. On these occasions, we paused the meeting to get everyone on the same page.

Creativity
We had to find new ways of doing the same things, or better things to do that suited this new way of working.

Collaboration
The only way to develop a product in these circumstances was to work together as a team. We had to get the best out of each of us, so that our whole was more than the sum of our parts.

Trust
Trusting in the team’s decisions was crucial. Sometimes a team makes a decision that might be against your thoughts. It is more than fine (actually I'd say it is almost mandatory) to discuss your point of view and opinions within the team. But if after that the whole team chooses to stick with the decision, you must defend it as if it were yours. It does not do you or the team any good to say "The team decided this but I..." Or, if their decision is proven wrong, to say "I told you!" If the latter happens, it’s better to re-evaluate the situation together, creating a good moment for you to raise your voice again in a constructive and positive way.

Time passed and things started to get better. Meetings that had taken a whole day became much shorter and more efficient as we learned to say: "ok, this is important, but now is not the moment to discuss it”. This allowed us to keep meetings on topic and to save any questions that weren't relevant for another time.

As we got to know each other better, we were able to avoid misunderstandings, reduce the time we spent in discussions and reach an agreement faster in a less exhausting way.

A year has already passed since this all started and we have already successfully delivered two milestones of the project. We’ve had good feedback from the business team and project managers, and, most importantly in my opinion, now WE ARE A TEAM. We are all different, coming from different countries with different cultures, but we work together towards the same goal as one.

How we hosted our first remote Designathon event

Are you thinking of organising a cross-functional remote event? Say no more – we've got your back. Through running our company-wide Designathon event, we learned how to collaborate and create a sense of togetherness even when we were physically apart. Check out this 10-step guide by our DesignOps Manager Simona on how to organise and run engaging online workshops that drive results.

The importance of user perspective

It’s all about perspective! This is even more true when it comes to the end user’s perspective in the software development lifecycle, as our Quality Engineers Karolina and Jose show us in this eye-opening article. Give it a read and get ready to see things from a different point of view!

Let’s unite and celebrate International Women’s Day! The official theme this year is #choosetochallenge, so we decided to conduct an experiment to show how we can all choose to challenge our assumptions, perceptions and biases.